To Caska (which is also a very beautiful beach) you can take the road to the ferry Žigljen-Prizna, and turn towards Barbati (Caska, Vidalići, Zubovići, Kustići Metajna). The distance is about 2 km from Novalja. 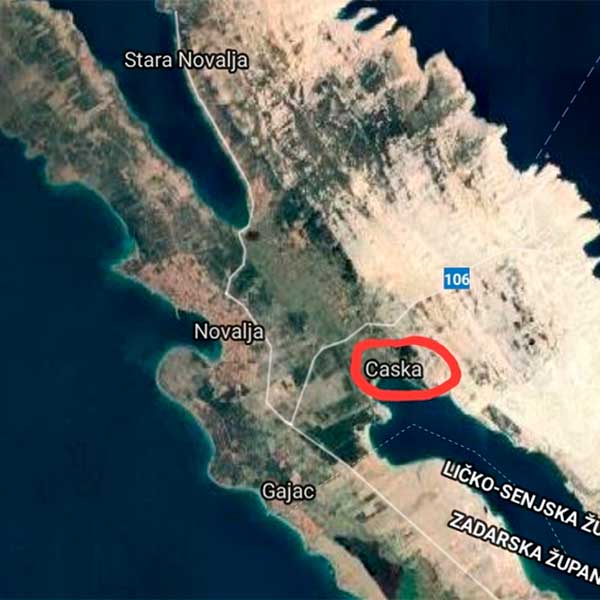 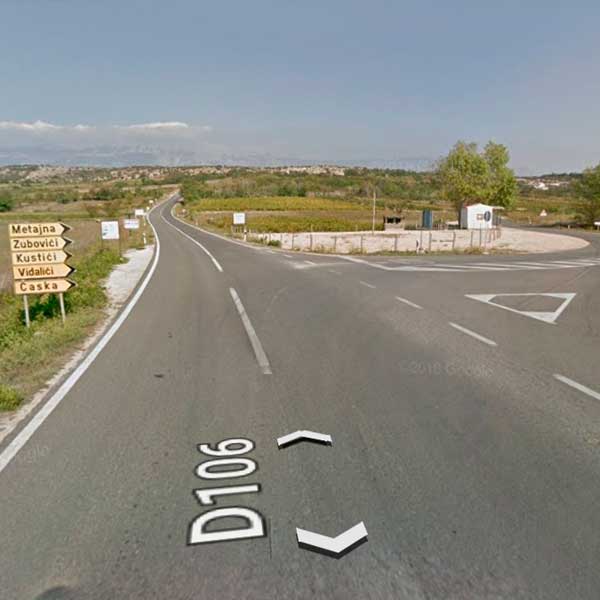 The numerous archaeological remains, visible even today in the area around the cove, bear witness to the use of the Caska area from ancient times to the present day. The particularly intensive life in ancient times, documented through the powerful ruins and several moveable archaeological finds, have for centuries fueled the imagination of the local inhabitant and attracted the attention of travelers. Although often mentioned in literature, it is only in the past decade that they have become the subject of systematic archaeological research, which from year to year changed and enriched the current knowledge about the islands dynamic past. 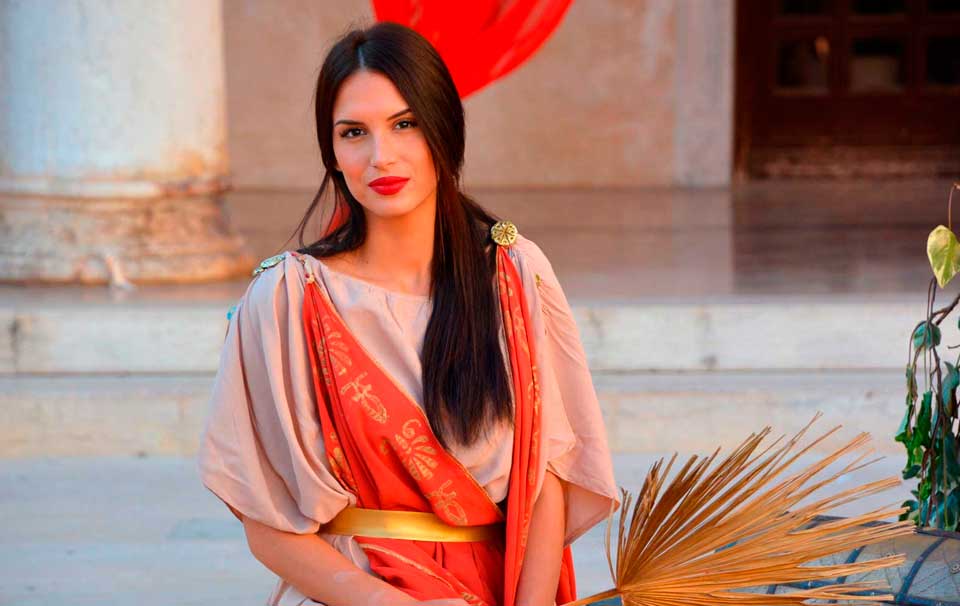 Inspired by the multitude of archaeological finds along the coastline and in the shallow waters of the cove, legends about the dramatic sinking of the famous and rich city of Kisa were passed down orally in the Novalja area for centuries. The most frequently told story was about two sisters, the good sister Bona and the evil sister Mala, and about the angel sent by god to find one good human being among the evil, corrupt population of Kisa. The angel found Bona and ordered her to flee the city, which forever disappeared into the sea in a terrible earthquake as she fled.

Archaeological and geophysical research in the area of Caska has uncovered traces of Roman residential and farm ruins. In the northern part of the cove, covering a surface area of about 320 m2, the ruins of the storage areas of villas have been investigated. They consisted of two partially walled off cellar areas dug to a depth of about 2,4 meters. Initially they were used for the storage of foodstuffs, but over time they were converted into disposal pits in which a great quantity of broken ceramic dishes, animal bones and other organic materials have been found. At the bottom of one of the cellar money from the 1st century B.C. was discovered, possibly indicating the time of construction of the first building. 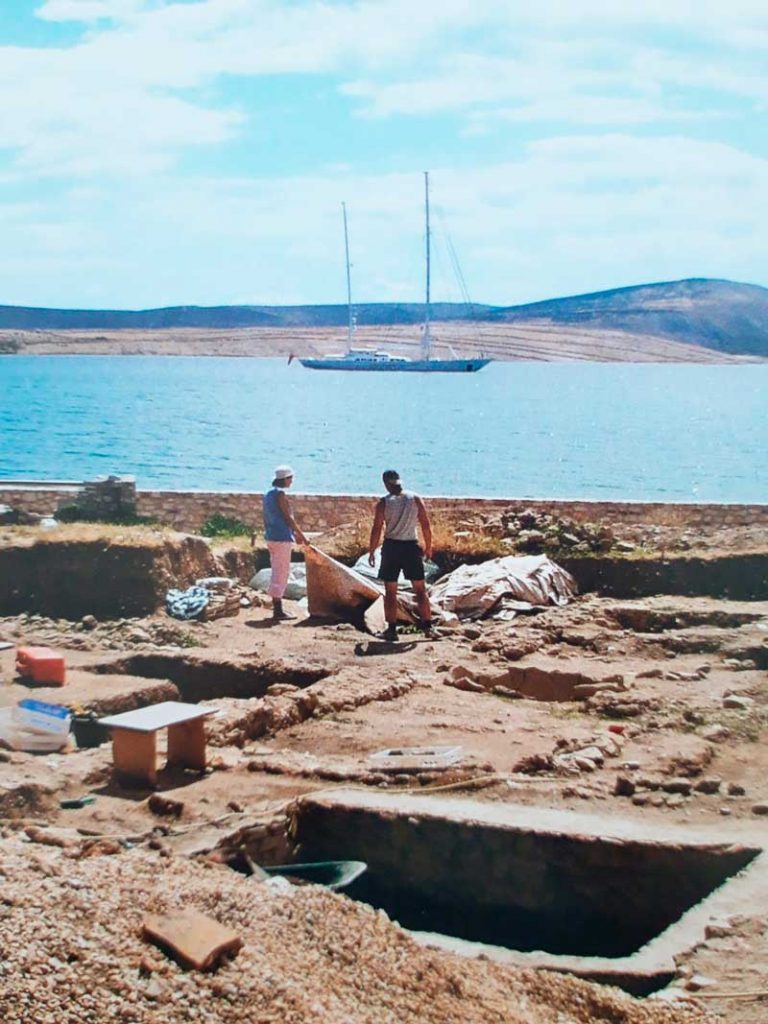 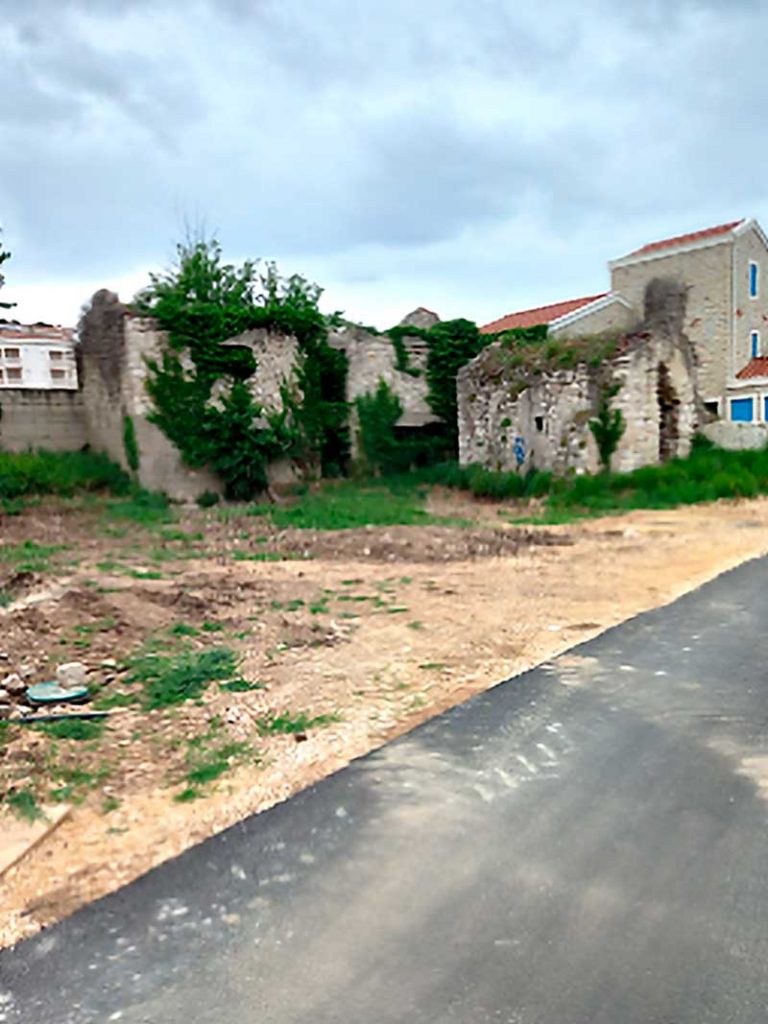 Geo-radar images revealed several areas grouped around a central empty space, but archaeological research of a lesser scope revealed only a few humble remnants of a habitation. The remnants of Roman buildings are also located around the cape of Zrće. The remains of massive walls that extend along the coastline from the area under Tunera/Turan to a location called Pod bužu have been interpreted in a variety of ways, but most often as supporting walls built to prevent landslides and intensive erosion or as the remnants of the town walls. Regardless of the reason why the Romans opted for such a demanding construction effort, it is obvious that the land on the eastern slopes of the cove were exceptionally important to them. An impressive underground standing –height canal has been preserved near Vela pošta south of Tunera/Turan, also at the Pod bužu location. The canal is passable for barely thirty meters canal for water drainage.

Located somewhere in the Caska area was the estate of the well-known Roman senatorial family Calpurnii Pisones, which is indicated by the ruins of three sacrificial althars erected by Calpurnia, the daughter of Lucius Calpurnius Piso Caesoninus, Roman Consul in the year 1 B.C., and the granddaughter of Gnaeus Calpurnius Piso, Roman Consul in 23 B. C. When Calpurnia lived in Caska, her family was experiencing difficult times: in 19 B.C. her uncle was accused of murdering the young and favorite Germanicus (the nephew of the emperor Tiberius and brother of the emperor Claudius), which ended in his suicide during the court procedure in 20 B.C. Calpurnias father also committed suicide in 24 B.C., during rigged court proceedings for supposedly insulting the emperor. After this the familys situation stabilized and things turned for the better.

The Roman necropolis in Caska Bay is located at its very end towards the macadam road leading to Zrće beach. One part of the finds can be seen in the City Museum in Novalja. 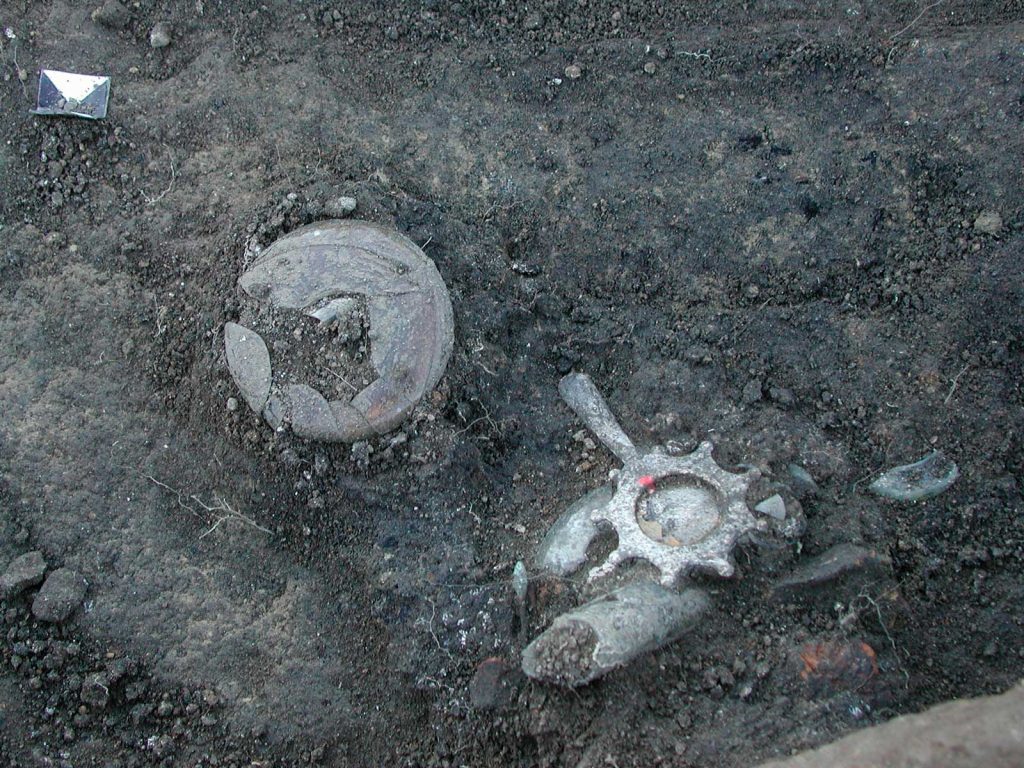 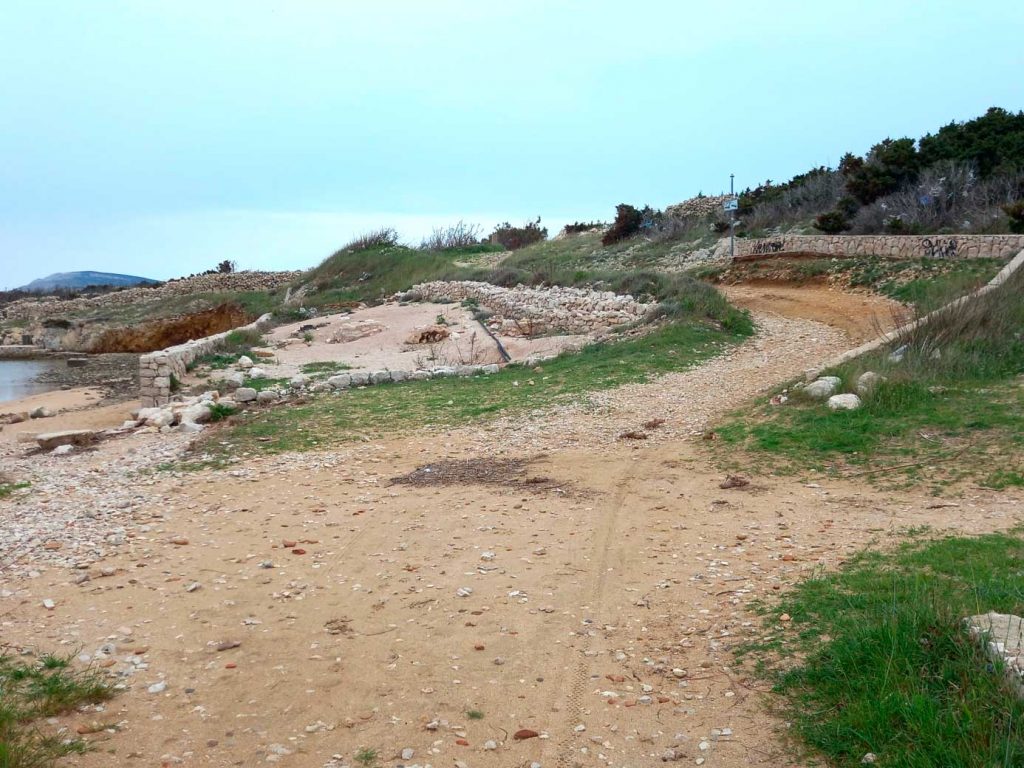 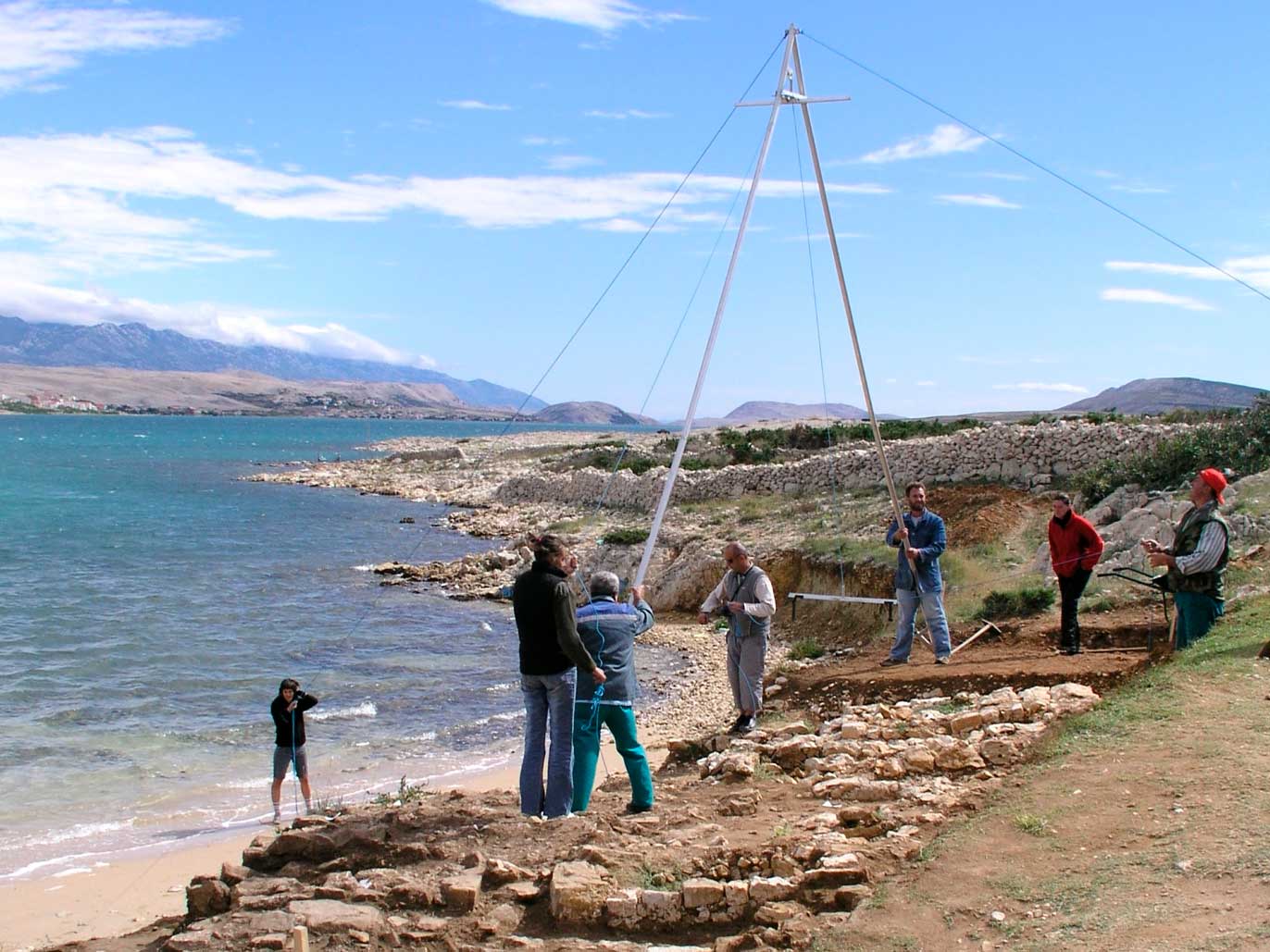 The term necropolis originates from the Greek word nekros=dead and polis =city, and in literal translation reads the city of the dead. This is how the Greeks and Romans denoted their cemeteries and why it has remained part of archaeological terminology.
Archaeological excavations conducted from 2003 to 2007 in the western part of the cove next to the Zrće peninsula revealed the far southeastern part of a graveyard that belonged to the ancient settlement. A total of forty-four cremation graves have been researched as well as a skeletal one, which date back to the fourth century A.D. A special feature of the necropolis in Caska is the special way in which the graves were made, a way which has not been observed at any other site.

Some of the finds from the Caska submarine, such as a wooden anchor and a model of a sewn ship, are in the City Museum in Novalja.
From ancient times the waters around Caska have attracted attention with their abundance of movable and immovable archaeological matter. Some of the smaller sites ended up on the sea floor through erosion of the coastline, while other parts of it are still located in their original locations. In front of the ruins of Kaštela and the church of Sv. Anton (St. Anthony) in the northern part of the cove sit the sunken remnants of a twenty-meter long breakwater , built as an embankmen of crushed rocks that protected the bottom of the cove from the southern winds 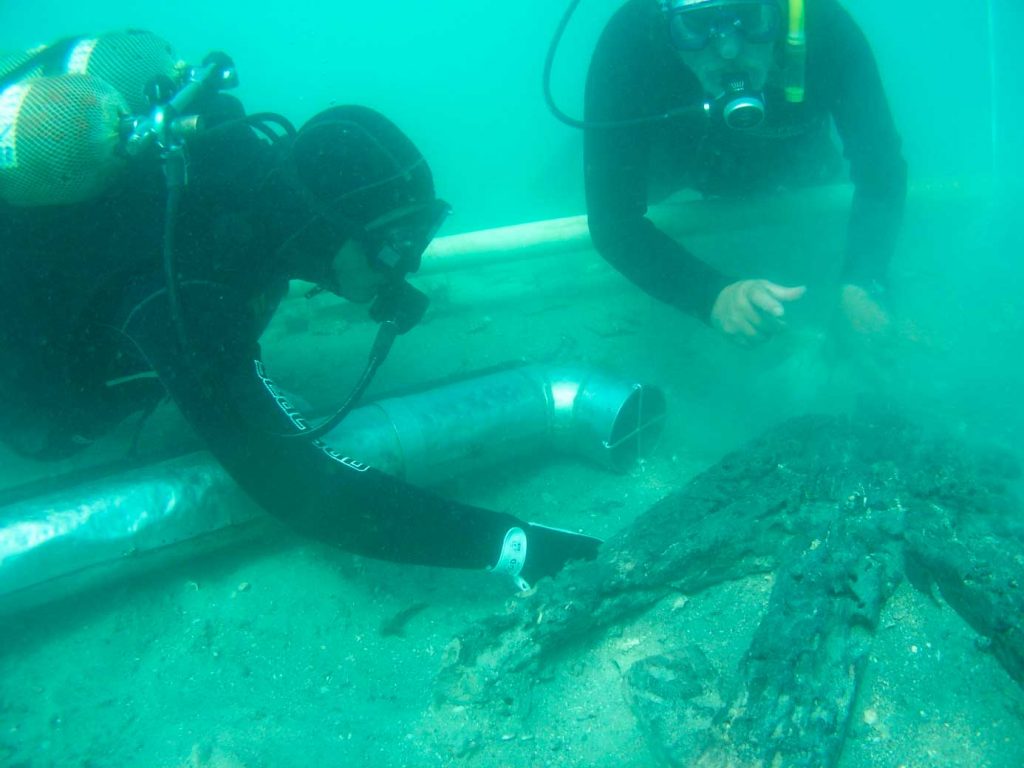 Systematic underwater exploration began in 2005. In that same year, an almost entirely preserved wooden anchor from Roman times was found near the break-water.
During the first and second centuries A.D., anchors made entirely from iron gradually replaced these older style anchors. The muddy bottom of the cove created anaerobic conditions, which were conducive to preserving the wood of the anchor, so that this rare find survived to modern times almost completely intact.
In 2007, the underwater area of Caska once again provided a surprise. In the area of the cove Mala pošta, south of Tunera, the remnants of a boat made with sewing techniques were found. Using this is old Mediterranean technique, the planks of the boat were joined together with plant fiber string, pulled through a series of openings along the plank edges. Sealing the area between the planks was achieved by using thicker plaits on the internal side of the ˇstitchesˇand coating the inside and outside of the boat with a thick layer of resin.
About eight meters long, the boat was filled with a mixture of broken stones and mortar. It was intentionally sunk, probably as part of an ancient coastal dock construction. Several wooden stakes were driven around it and through it. Nearby an iron axe with completely preserved wooden handle, which was probably used to cut the wood, was found. Judging by the other movable finds, the boat was used in the second century A.D.

The fort is already visible from the road leading to Caska and further towards Vidalići, Zubovići, Kustići and Metajna. The fort itself is not too high, so the ascent is possible even for the less skilled, but it is quite steep and you should still be careful.
Rich grave goods and an old Croatian burial of a girl found at this site are currently being processed at the Archaeological Museum in Zadar. 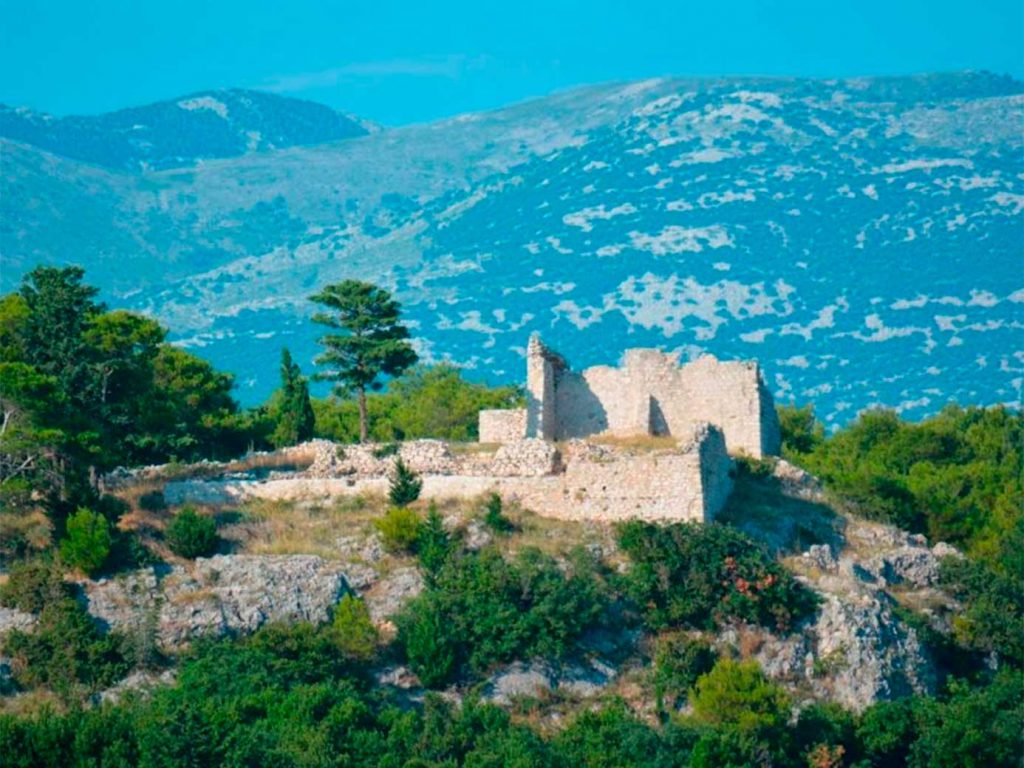 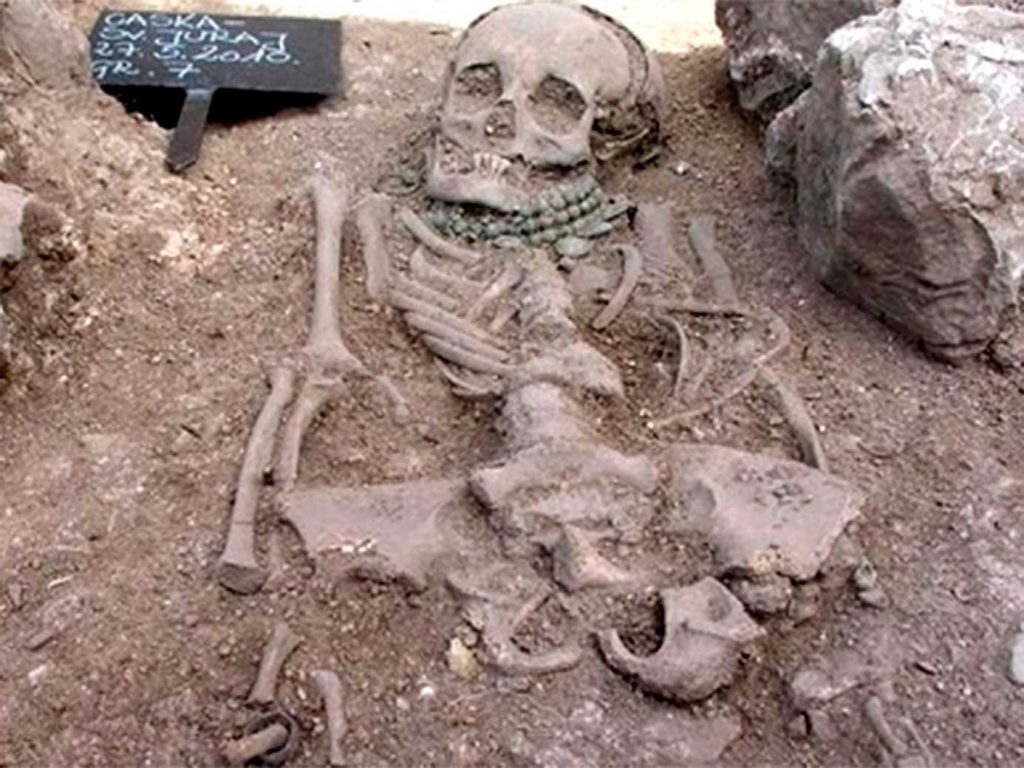 At the top of the Sv. Juraj ( St. George) hill above Caska there are remnants of a medieval fort, which may have originated in late antiquity, possibly in the sixth century during the time of the Byzantine emperor Justinian and his wars against the Eastern Goths.
Judging by the visible remnants, the fort had a rectangular shape. At its south-eastern corner the small church of sv. Juraj was built. The present day church originates most likely from the fourteenth century. However, it may have been built on the remains of another older sacral building. In 2006, the existing condition of and archaeological research in the fort and church began to be recorded. This effort led to the discovery of a small girl decorated in rich jewelry.